Salute was a bitter sweet event this year. My main motivation for attending has always been to be impressed and inspired by the gaming and display tables, with shopping opportunities as a bonus. This year I had a shopping list, consisting largely of new rules systems (Oathmark, Stargrave, Gaslands Refuelled), a box of Fireforge peasant zombies for my necromancer to summon into his Warhammer 8th edition army, plus the obligatory new KR case to carry the latest forces I managed to paint.

All that purchasing luckily distracted from the lack of photo opportunities. For some years now the number of jaw dropping displays has been steadily declining, and this year they fell off a cliff. My respect goes out to anyone who manages to build and bring a table full of terrain and opposing forces to a wargaming show, especially as a club effort without any related rules or miniatures to sell. Still, the amount of empty floor space due to missing traders, and worse, tables that had been set up but remained vacant on the day, didn’t inspire my photo journalistic fervour of previous years. Therefore I only took some snapshots of two displays in attendance.

The first was created by the Loughton Strike Force, who are consistently bringing amazing looking games to Salute. Their ‘Stalingrad – Fire on the Volga’ was played using the new ‘O’ Group set of battalion level WWII rules. You can see many more photos of it on their website.

The second display that stood out to me featured World of Twilight. The creators have been attending Salute for many years, and I always enjoy looking at their unique miniatures and terrain. I believe this year was the first time they brought a ‘full size’ table, with lots of buildings and little vignettes.

I guess next year, with the show scheduled to be back in its regular April slot, will tell what the new normal for Salute is going to be. 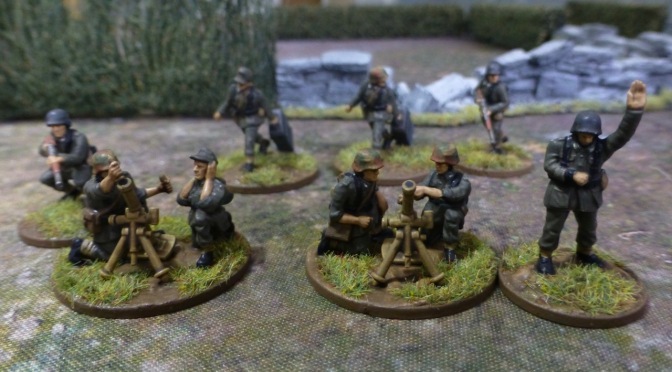 I continued with my late war Germans and completed the infantry support units. From start to finish the force took me 6 weeks of building and painting 64 figures, amounting to 300 points in Battlegroup, a squad level engagement. Costing £27.50 for two sets of figures (plus £2.50 for the German Field Grey Vallejo paint), this is probably my cheapest and quickest playable force so far. Going smaller scale, plastic and Army Painter dip in a historical setting really makes a difference for getting things done.

I put together two medium mortar teams with loaders, two MG42s on tripods, an additional grenadier squad with an MG34 on bipod, plus MG ammo carriers. I still have a spare medium mortar and MG42 but felt it’s unlikely I would every use those. I also didn’t build the 120mm mortars since I would rather have them as off table support. 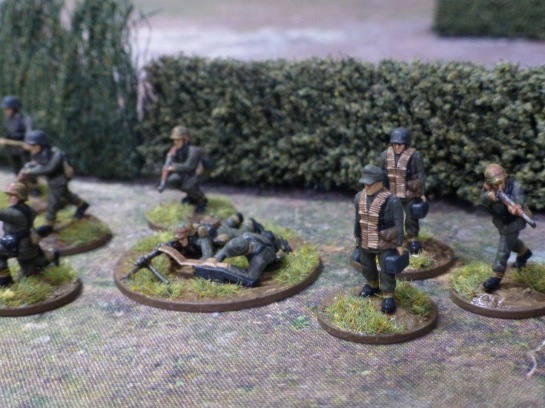 Two panzerschreck teams, a medic and enough grenadiers with panzerfausts to equip every squad complete the infantry element of this army. Next up, armoured support and possibly some halftracks. 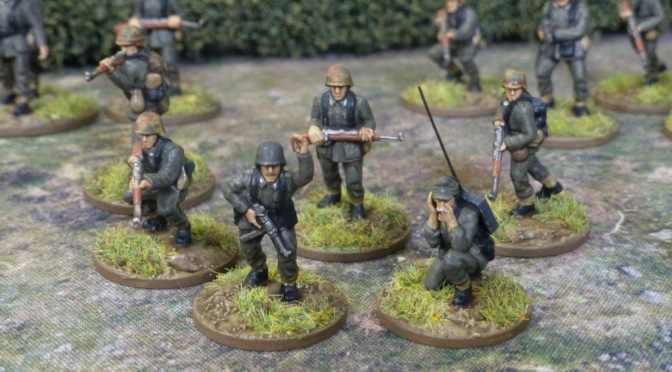 For the longest time I have been contemplating which scale to collect World War 2 forces in. A while back I bought the Battlegroup rule set thanks to its good reviews and the nice presentation. Its miniature photography is really the best in capturing the eye level view of a soldier in the field that we are hoping to recreate with our wargames (well, I am anyway).

The choice then came down to either 15mm or 20mm scale, and I opted for the larger of the two. Since I am more interested in infantry engagements over tank battles, individually based soldiers appealed most to me. I wasn’t going to go with 28mm since I wanted more room for manoeuvre and more realistic weapons ranges on my usual 6’x4′ gaming table, in addition to cheaper armies that would be easier to store.

I kicked off my collection with a platoon from a German infantry division fighting in Normandy 1944. It is based on the army list in Battlegroup: Overlord – Beyond the Beaches.

I am only going for reasonable representation with regards to colour schemes. In terms of accurate base uniform colours, the opinions online are already divided. I opted for Vallejo’s German WW2 Field Grey. All other colours are chosen from the range of paints I had in my collection for all-round use.

The figures are kits from the Plastic Soldier Company. They are easy to assemble hard plastics. Details are a bit soft and there were some mould lines to scrape off but I am happy enough with the quality to keep using the range. All figures come with integrated bases, so after gluing them to 1p and 2p pieces (40mm Renedra plastic bases for the MGs) I used Polyfilla to blend them in. This provided a good ground texture at the same time.

I simply applied a layer of base colours over a white undercoat and then brushed on Army Painter Dark Tone. My usual grass mix works in this scale and setting I find. After giving them a dusting of Testors Dull Coat they are at an agreeable gaming standard for me.

The only ‘conversion’ I did was replacing the antenna on the radio operator (which broke off anyway) with a plastic broom bristle. 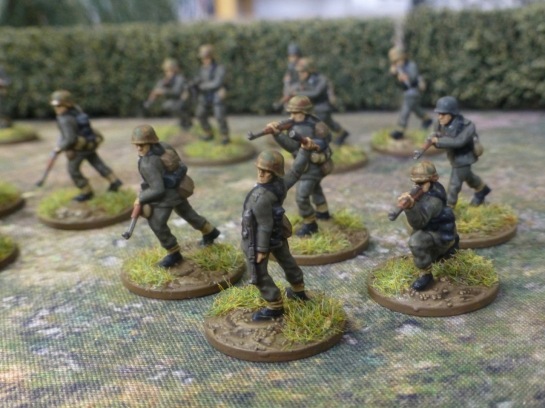 The platoon contains three bipod mounted MG34 teams. I painted up two in deployed mode and one advancing for now, to give me some variety. For gaming later on I will probably want all three deployed. First off, I am going to work on various support units though.

Gringo 40s put on a colonial game at Salute 2019 in the unusual setting of the Tonkin Campaign. In a combined naval and land action, French troops and their allies went up against the Black Flags.

Ardhammer created a battle on the ‘Highway to Hell – the Road to Nanjing’ during the 2nd Sino-Japanese War in 1937.

Peterborough Wargames Club staged D-Day landings by US forces on the beaches of ‘Bloody Omaha’.

There were a couple of 19th century shenanigans going on at Salute 2019.

The always gorgeous OSHIRO modelterrain cooperated with Highgate Miniatures and Wiley Games on ‘Horror in Limehouse’. The game introduced the new ‘Tales of Horror’ supplement for ‘Fistful of Lead’.

Spirit of the Game staged ‘Blaze of Glory’, a Wild West skirmish in the town of Persistence, Dakota.

The team behind the Wargamer Collection Calculator fought the Battle of the Little Big Horn over a series of hex based game boards.