When I expanded my Necron army with some larger constructs, a couple of commenters asked for an updated picture of them all together. With other projects out of the way, I therefore cleared the table and brought out my collected Necron forces, 1,500 points in total (for a full size image, open it in a new tab).

Unfortunately, the recently assembled Catachan patrol was still in the area as the Necrons emerged. Woefully under strength against such opponents, the Imperial guardsmen dug in as best they could, hoping to hold out until reinforcements could arrive.

With their communications scrambled and the merciless machines moving in, the Catachans poured fire into their enemies before fixing bayonets for the final assault. No trace of the platoon was ever found and a report of its mysterious disappearance was filed by Regimental HQ. 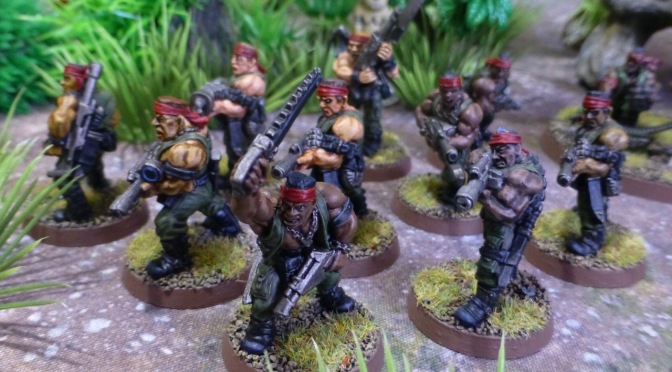 Not all the forces I am working on are intended to become solid core armies. Some factions lend themselves to be detachments for skirmishes, specific scenarios or reinforcements for other armies.

The first of these detachments I have just completed is a 500 points strong infantry platoon of the Catachan Jungle Fighters for Warhammer 40k 7th Edition. Often called upon to fight in the dense jungles of tropical death worlds, it is fitting for them to operate without vehicle support.

The commander uses the Lord Commissar rules, but is represented by a Captain. In the Catachan background, Commissars have a tendency to meet unfortunate accidents, and it is therefore likely that leaders from within their ranks fulfil the role of instilling discipline with an iron fist, and through their own heroics.

The troops consist of a Platoon HQ with missile launcher and plasma gun plus two squads equipped with flamers and krak grenades.

Providing fire support are three weapons teams with heavy bolters and an autocannon to take down larger targets. A squad of Ogryns adds close combat capabilities to the platoon.

If I want to expand this force , I’ll probably go for an air mobile squad of veterans in a Valkyrie and a special weapons squad with flamers. A sniper and a trooper with a heavy flamer would also come in handy, so I can change the load out of some squads. 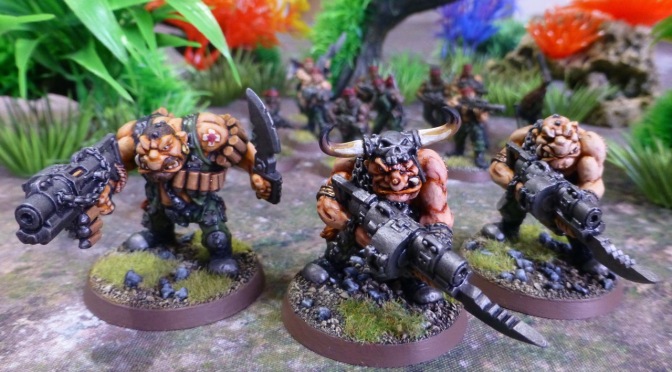 I’ve had these chunky metal Ogryns for Warhammer 40k half-painted for the longest time, since their unconventional style of uniform didn’t fit with any of the Imperial Guard regiments I was building. As soon as I decided to paint a detachment of Catachan Jungle Fighters however, they found their spiritual home.

Now I am just missing the Captain for this 500 points Catachan infantry detachment. There’s going to be a rumble in the jungle soon, as they discover long abandoned ruins and reawaken forces that should better have been left in their eternal stasis…

My 1,000 points Praetorian Guard army for Warhammer 40k 7th Edition is finally completed. It started out 20 years ago with the Chimera and the lascannon teams taking part in a tank battle. Since then the other elements gradually came together, with the occasional interruption for re-basing and additional detailing on parts that had already been finished.

Similar to my Mordian Iron Guard, this Praetorian Guard force is based around an infantry platoon with attached weapons teams and some armoured support. The backbone of the Imperial Guard taking to the field.

The reconnaissance element consists of a Sentinel with multilaser and two 3-man teams of Ratling Snipers. All suitable choices for the savannah like area of operations I have in mind.

Fire support is provided by lascannons and a mix of heavy bolters and an autocannon. When I saw how people had swapped the lascannon wheels for those from the old Ork artillery, I borrowed the idea.

The Lemon Russ was the last model to be finished. All vehicles ended up with different shades of sand colour, since several generations of paints went out of production during the raising of this force. I chose to interpret it as adding to the realism of an army supplied by the Adeptus Administratum.

While I was avoiding painting the tank I decided to convert the veteran squad and accordingly also the Command HQ which is formed of veteran soldiers. I both wanted to add variety to the appearance of the infantry units and also make it easier to tell them apart on the battlefield. The topknots were mainly plundered from the Chaos Marauders for Warhammer Fantasy Battle which is a kit that keeps on giving.

There are another 500 points of reinforcements in different stages of assembly and painting, so the Praetorian Guard will be added to whenever inspiration for them strikes me.

Every Imperial Guard company in Epic 40k 2nd Edition can get a free Commissar detachment, which is highly advisable to field in order to maintain its command structure. Luckily I had five spare Chimeras so I could build and paint a Commissar stand and transport for each of the companies I am planning (Tactical, Heavy, Leman Russ, Baneblade, Shadowsword).