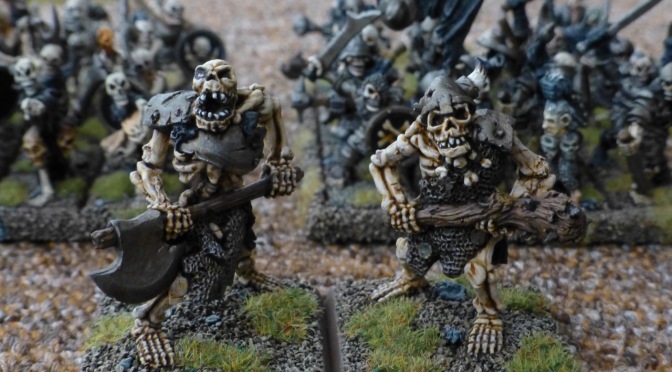 I’ve returned to my Forces of Undeath army for Oldhammer which I ‘finished’ last year to add more options, additional corpses to raise from the grave by foul spells and just satisfy my desire to paint more old bones.

I’d seen the Skeleton Ogres from the ‘Das Schwarze Auge’ range now distributed by Ral Partha Europe appear in various forces over the years, including during my battle against Chico’s Undead, and finally decided to add them to my collection after reading Rab’s recent post for Deadcember.

There are no rules for Skeleton Ogres in Warhammer 3rd Edition, but since Rab kindly did all the legwork and shared his house rules, I’ll simply add these as an extension to the Warhammer Armies list.

For a review of the sculpts, WIP shots and conversion ideas, check out Azazel’s Bitz Box.

There are only two figures, but for old school Warhammer I’ve never fielded monstrous creatures in larger units anyway. The sculpts fit well with the classic Citadel/Marauder aesthetics and feel like a natural addition to my army.

This site uses Akismet to reduce spam. Learn how your comment data is processed.