When I expanded my Necron army with some larger constructs, a couple of commenters asked for an updated picture of them all together. With other projects out of the way, I therefore cleared the table and brought out my collected Necron forces, 1,500 points in total (for a full size image, open it in a new tab).

Unfortunately, the recently assembled Catachan patrol was still in the area as the Necrons emerged. Woefully under strength against such opponents, the Imperial guardsmen dug in as best they could, hoping to hold out until reinforcements could arrive.

With their communications scrambled and the merciless machines moving in, the Catachans poured fire into their enemies before fixing bayonets for the final assault. No trace of the platoon was ever found and a report of its mysterious disappearance was filed by Regimental HQ.

Not all the forces I am working on are intended to become solid core armies. Some factions lend themselves to be detachments for skirmishes, specific scenarios or reinforcements for other armies.

The first of these detachments I have just completed is a 500 points strong infantry platoon of the Catachan Jungle Fighters for Warhammer 40k 7th Edition. Often called upon to fight in the dense jungles of tropical death worlds, it is fitting for them to operate without vehicle support.

The commander uses the Lord Commissar rules, but is represented by a Captain. In the Catachan background, Commissars have a tendency to meet unfortunate accidents, and it is therefore likely that leaders from within their ranks fulfil the role of instilling discipline with an iron fist, and through their own heroics.

The troops consist of a Platoon HQ with missile launcher and plasma gun plus two squads equipped with flamers and krak grenades.

Providing fire support are three weapons teams with heavy bolters and an autocannon to take down larger targets. A squad of Ogryns adds close combat capabilities to the platoon.

If I want to expand this force , I’ll probably go for an air mobile squad of veterans in a Valkyrie and a special weapons squad with flamers. A sniper and a trooper with a heavy flamer would also come in handy, so I can change the load out of some squads.

I’ve had these chunky metal Ogryns for Warhammer 40k half-painted for the longest time, since their unconventional style of uniform didn’t fit with any of the Imperial Guard regiments I was building. As soon as I decided to paint a detachment of Catachan Jungle Fighters however, they found their spiritual home.

Now I am just missing the Captain for this 500 points Catachan infantry detachment. There’s going to be a rumble in the jungle soon, as they discover long abandoned ruins and reawaken forces that should better have been left in their eternal stasis… 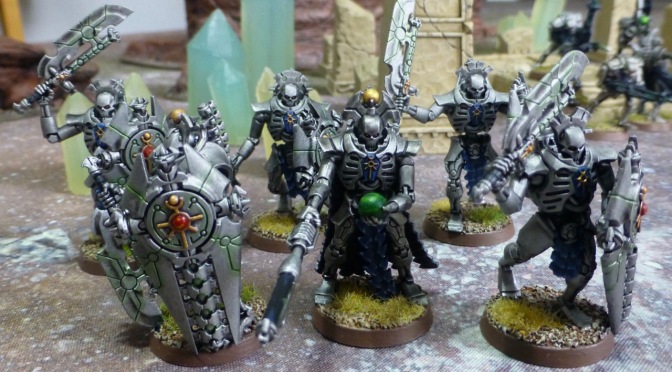 Motivated by my quick painting progress and inspired by the positive feedback from you lot on my Necrons, I completed their reinforcements with a unit of Lychguard and another Lord.

Being multi-part plastic kits, they needed to be painted rather than polished, and I’d given them a shiny silver undercoat years ago, when I initially put them together. Thus they ended up lighter than some of my more recent figures, but as they are elite royal guardians, I felt this to be quite appropriate.

I stuck to silver with all of their bodies and armaments and added the usual detailing – gold for the glyphs, red for eyes and jewels and blue for the tabards. To indicate the energy coursing through their shields and blades, I applied green glaze along the seams. This adds some interest while maintaining the overall stark metallic look of the unit and the whole army.

The final addition to the force is another Lord. This one is a metal sculpt, but since I bought it second hand, I needed to paint over it. I never found stripping paint worth my while and rather accept a bit of roughness in the final result.

So this is it for now, the Overlord has awoken enough troops from their stasis to challenge any of the armies in my collection. Who is going to marshal their forces next to counter the Necron threat to the galaxy?

Following my long-laid plan, I have activated further Necron constructs to purge any offending life forms from my resurgent interstellar empire.

These are all metal models from the original range. With the exception of the Scarabs, I painted the metal instead of just washing and polishing it, since the larger constructs needed quite a bit of glue to hold together.

To lead the growing Necron force into battle, I am going to add another Lord (while promoting one of the existing ones to an Overlord) and a unit of Lychguard for an additional 500 points overall.