The mob of flagellants is ready to preach fire and brimstone at the end of an iron flail across the Empire. While Warhammer 8th Edition rewards massive armies with hordes of 30+ models, I am more interested in painting moderately sized forces with a variety of archetypal troop types. It’s always possible to double up later.

Throwing together three generations of sculpts made this an enjoyable painting project. The models from the Mordheim range sport the most additional detail, which is very characterful. Admittedly I could have added extra bits and pieces to the newer figures from the plastic kit, but for an entire regiment I am quite happy keeping it simple. The Marauder Miniatures versions are the most plain, but do have individual character with distinct faces and poses.

Leading the charge for my Witch Hunter contingent and the wider Empire forces I am building, these guys are some of the few humans I have painted for Warhammer Fantasy Battle. While not going to reach my Imperial Guard numbers anytime soon, I do hope to rectify this somewhat over the next months. 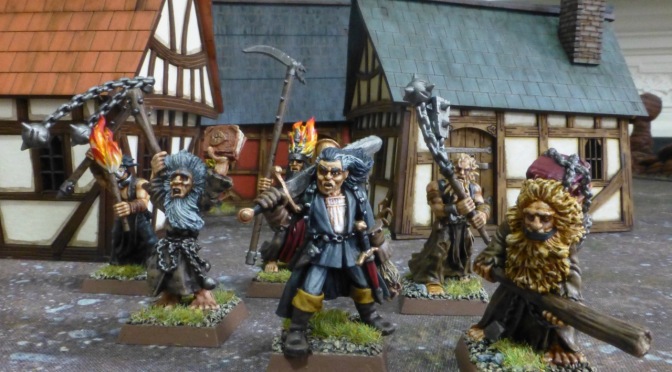 The second contingent size force for Warhammer Fantasy Battle I am working on is based around a Witch Hunter and the followers he has stirred up. These consist of a unit of flagellants, some free company fighters and a group of huntsmen.

I started off with the flagellants, combining the current plastic kit with old Marauder sculpts. Altogether I am aiming for 15, which will also include figures from the Mordheim range.

The Witch Hunter is also a Mordheim model. Once this contingent is finished, it should provide a good recruiting pool for a warband to head into the City of the Damned.

Painting flames for me is a pain, but they do give this faction a suitable vibe. Much more enjoyable to paint was this flagellant carrying a stack of books on his back, who has always been a favourite sculpt.

I’m throwing all skeletons with polearms together into a unit of Grim Reapers for my Oldhammer Undead. The majority will probably wield scythes in the end but I am starting with this motley assortment of blades on a stick.

Three of the figures are from Marauder Miniatures, one Citadel, and one is by Bob Olley I believe. The weedy looking fellow on the left in the first photo is possibly Essex Miniatures. The figure was part of a batch purchase and I wanted to do it justice by fielding it all those decades after its creation. I imagine it portrays an unfortunate young farmhand drafted into a long forgotten war. Another broken sculpt from that purchase had already found its place as part of a terrain piece.

When the Winds of Hobby Motivation are waning, the Lore of Death can usually still squeeze the odd beat out of my shrivelled necromantic heart.

As one can never have enough skeletons, I painted up a couple of old metal Marauder and Citadel warriors of bone and two others which were part of a bundle purchase and possibly produced by Grenadier or another long defunct manufacturer.

The Citadel figures are mostly slotta models with one that pre-dates this era. I went with my usual simple colour scheme of mostly black and iron while painting the more ornately armoured fighters with oxidised bronze plate.

The non-Warhammer miniatures of a sword fighter and a crossbowman are based on round bases as I will use them in skirmish games like Frostgrave rather than my Oldhammer Undead army. 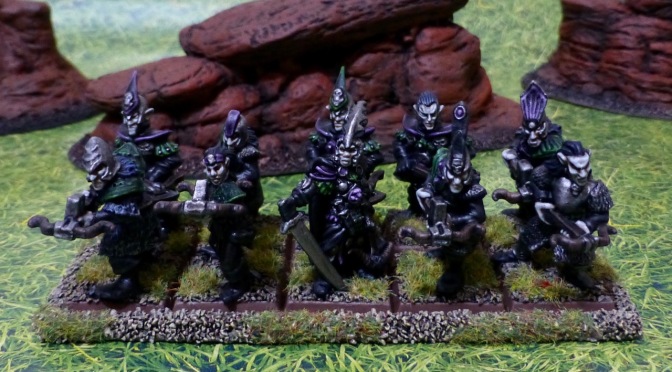 I didn’t make much progress with my Oldhammer armies last year, so it is time to revisit some half finished forces and regiments. My Dark Elves for example needed a second unit of ten crossbowmen, all of which had been assembled and prepared when I first worked on the project.

Leading the freshly painted regiment is the Evil Dark Elf Captain from the 1985 Citadel Miniatures BC2 Monsters Starter Set (Stuff of Legends to the rescue again in identifying the sculpt). I like the style of his armour and equipment, only the sword looks more like an orcish cleaver than an elven blade. I’ll work that into his backstory somehow.

Most of the troopers are from the Marauder Miniatures 1988 MM70 Dark Elves range.

In proportions and style they fit well with the Citadel Fantasy Regiments Dark Elves – in fact better than most of Citadel’s own metal range, so I have added three to the ranks.