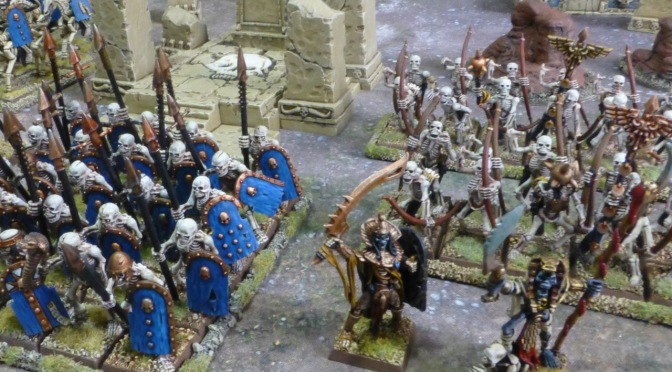 After having revived my Tomb Kings back in 2016, I just completed the first 1,000 points under Warhammer Fantasy Battle 8th Edition rules. The core troops of the Tomb Kings offer a range of tactical options, from archers to spearmen and cavalry, so the army should be entertaining to field.

The Tomb King was the final model I completed, while the Liche Priest is a second hand model that fits well into my paint scheme and only needed re-basing.

Once I had all troops lined up, I found the archers and spearmen to look a bit flat, so I went back over them, adding highlights to shields, weapons and bones. This ties them in better with the cavalry models as well, which were individually highlighted rather than drybrushed.

There are still a lot more regiments and constructs buried in the sand, waiting to be resurrected to march forth and conquer an eternal empire for my Tomb Kings. Some horse archers and Ushabti might be next, though for now I am going to direct my gaze towards the living. Or maybe the daemonic… 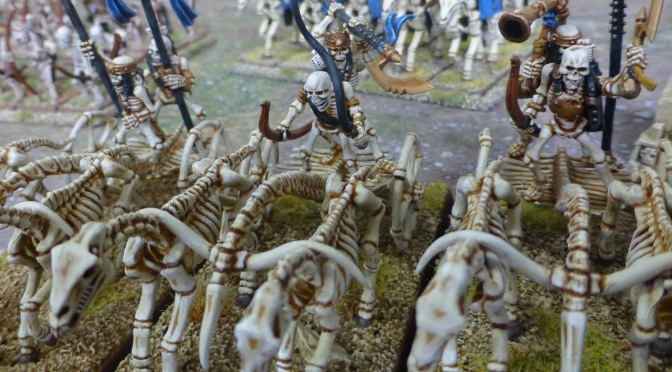 Obviously a Tomb Kings army needs to feature some of their signature models, the skeleton chariots. This provided me with the perfect opportunity to finally put the classic plastic kits to good use, combining them with some later skeleton and Tomb Kings parts.

Painting all the bones by hand is a somewhat tedious but not overly taxing process. I’m planning a second rank already, but for the core army of 1,000 points these three should strike fear into the hearts of their enemies already.

While I had all forces arrayed on the battlefield, I also observed that the old archer regiments, which were based on some haphazardly drybrushed figures of yore, looked a bit flat and didn’t tie in very well with the style of bone I have been recently painting. In order to improve on that, I added an additional highlight of pure white while also doing a bit of extra work on the metals. 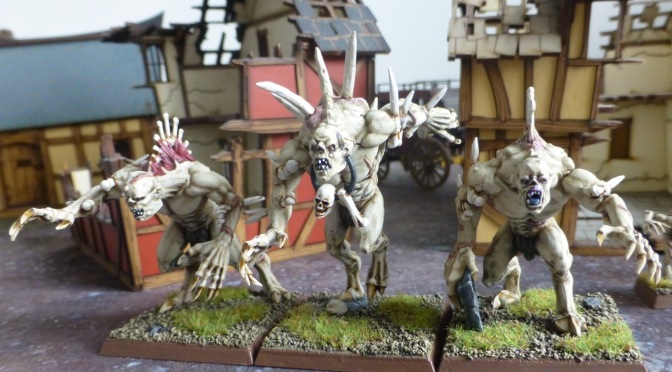 I’ve added some more big beasts to my army of the Ghoul Kings in the form of three Crypt Horrors. As with the Ghouls, I wasn’t keen on the sculpts originally, but by choosing the parts I liked and painting them in my chosen pale colours I am now very happy with the result. Or whatever the equivalent of happiness is for a cold hearted necromancer like myself.

I still have the Terrorgheist to add to the force as well, but for now I’ll probably move on to other vampiric houses and practitioners of the necromantic arts. I do like the idea of adding a unit of human followers in the form of the Strigany to the Ghoul Kings though, eventually. 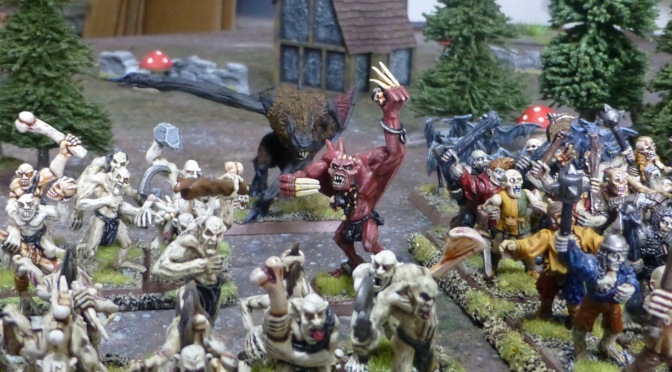 The second of my armies for the undead in Warhammer Fantasy Battle is themed around the Ghoul Kings. It’s another force that has been decades in the making and is utilising figures of various ages.

As their name implies, the Ghoul Kings are followed by a court of ravenous carrion eaters, and other monstrous creatures of darkness flock to their unholy aura. Zombies rise in their wake, recent victims of their raids into the lands of the living.

This army makes for 1,000 points under 8th Edition rules, ready to be combined or mixed with my existing Vampire Counts army should the opportunity arise. The Strigoi Ghoul King is a metal sculpt from the time of an earlier edition, when this type of vampire was first introduced as a distinct faction. The lowlier vampire in his thrall I just painted now, using the plastic rider from the Terrorgheist kit.

I had finished the Varghulf some time back, but took the opportunity to highlight its wing membranes and claws further while also scattering a couple of bones on its base for decoration.

It’s a compact little infantry force, well suited for a battle even on a 4×4 gaming table. However, plans are obviously afoot to expand the army to 2,000 points. While using some existing models like more bats and Dire Wolves, the main new addition will be a Terrorgheist and some Crypt Horrors I have yet to build. 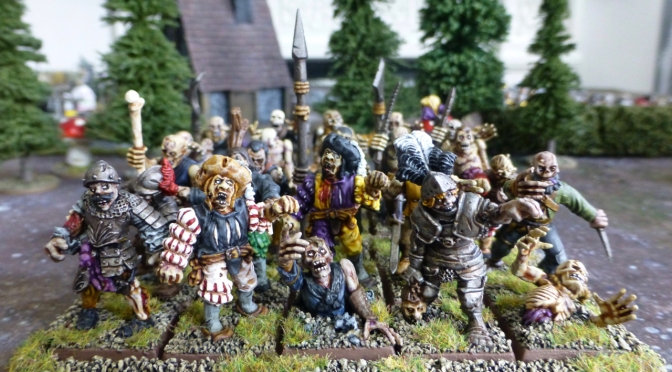 It turned into a bit of a slog towards the end, but I managed to complete my horde of 30 zombies in thrall to the Ghoul Kings for Warhammer Fantasy Battle.

A dozen of the figures are metals from The Assault Group that I ordered with their Kickstarter in 2017. Five of the sculpts are now available from their store, while the sixth was an exclusive. They will tie in nicely with my fledgling Empire army, hence I painted some of the zombies up in the state colours of Ostermark and Ostland.

To complete the regiment I dug through my bits box and combined  Citadel plastic zombie heads and arms with bodies from the archers and militia sets. One is using the legs and torso of a Perry Miniatures mercenary, while two do not use any legs since I modelled them to be emerging from the cursed soil of Sylvania.

Altogether I have a horde of 60 zombies now for my masters of the necromantic arts to call upon. The upcoming Fireforge zombies are looking pretty nice as well, so I might add another unit of them in future. Maybe something for my Salute 2020 shopping list.